This its a very important step, there should be four solder lines once you remove the NEC/TOKIN Capacitor, the Tantalum Capacitors have a Positive Pole and a Negative Pole, the Grey Sign its your Positive Pole, the rest of black its the Negative Pole, the 2 Middle lines “almost together” are your Negative Poles, the other 2 from the start are your Positive, you need to solder 4 Tantalums in the correct order, solder them in a 65º Angle, in order to fit 2 Tantalum Capacitors in 2 lines “Positive/Negative”, its important while soldering that the legs of the Capacitor touch they´re respective rails “Positive/Negative”. “See the picture for reference” 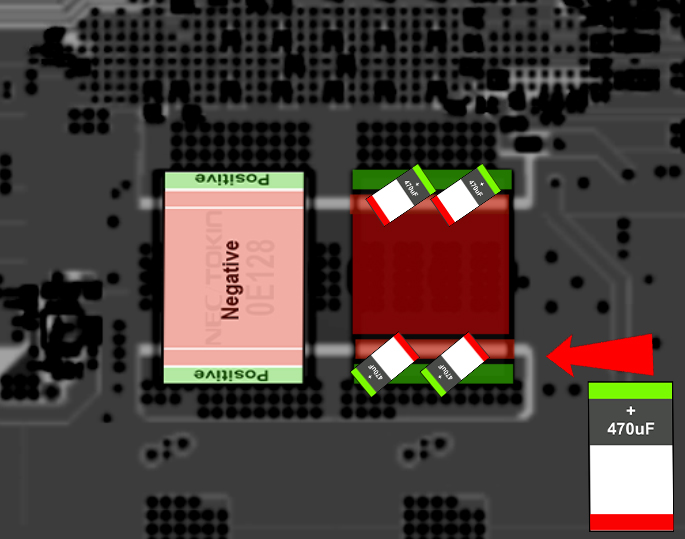 After you done soldering all the four capacitors, grab some electical tape,and isolate the Tantalum Capacitors, this will make sure that the Solder from the Tantalums wont touch the EMI Sheild “Electro Magnetic – Sheild” thus creating a short, after that assemble the PlayStation3, and test the console. 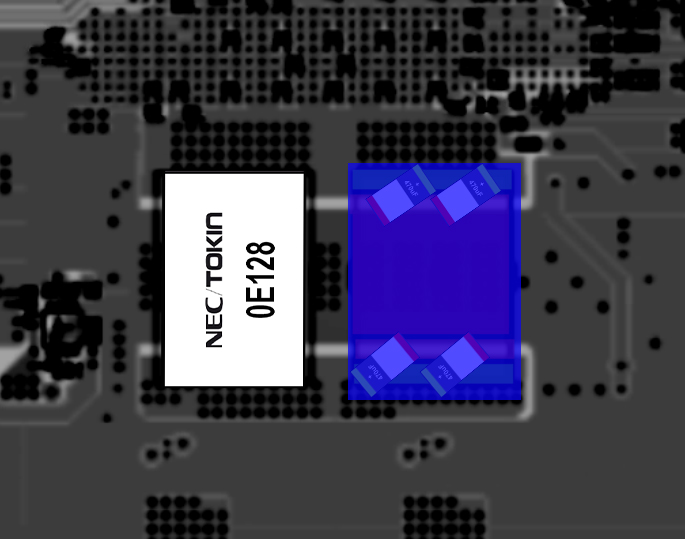 If all has been done correctly, your console should boot without any problems, Congratulations you just fixed your PlayStation3, if your console refuses to boot, inspect,and make sure you solder them right, take a look carefully,and test it again, if it still refuses to boot,then more capacitors replacement its needed, replace the 2nd NEC/TOKIN with Tantalums on the RSX Area,where you replaced the NEC/TOKIN area before, the procedure its the same.

“IMPORTANT – TO MAKE SURE YOU DID IT RIGHT, AND MORE CAPACITORS NEEDS REPLACEMENT, THE YLOD MUST BE DELAYED, SOMEWHERE IN BETWEEN 3/5 SEC TIME-FRAME, IF ITS IMMEDIATE/SHORTED THAN THAT, IT MEANS THAT THE CAPACITOR ITS NOT PROPERLY SOLDERED, THAT HAPPENS WHEN A NEC ITS REMOVED,BECAUSE THERE IS NO CURRENT SUPPLY TO THE CHIP”

“NOTICE – IF YOU ARE PLANNING TO REMOVE THE NEC/TOKINS, I SUGGEST TO LEAVE THE ORIGINAL NECS UNDER THE BOARD, AS THEY HAVE AN INTERNAL BRIDGE/JUMPER ON THE POSITIVE POINT, SO IT WILL CREATE A BRIDGE FOR THE TANTALUMS, BUT IF YOU DECIDE TO REMOVE ALL THE NECS, YOULL HAVE TO BRIDGE THE TANTALUMS FROM THE POSITIVE TO POSITIVE POINTS WITH A HIGH GUAGE WIRE OR ELSE THE CURRENT WONT PASS THOUGH,SINCE THERE IS NO BRIDGE BETWEEN THE TANTALUMS! “See Picture for Reference” 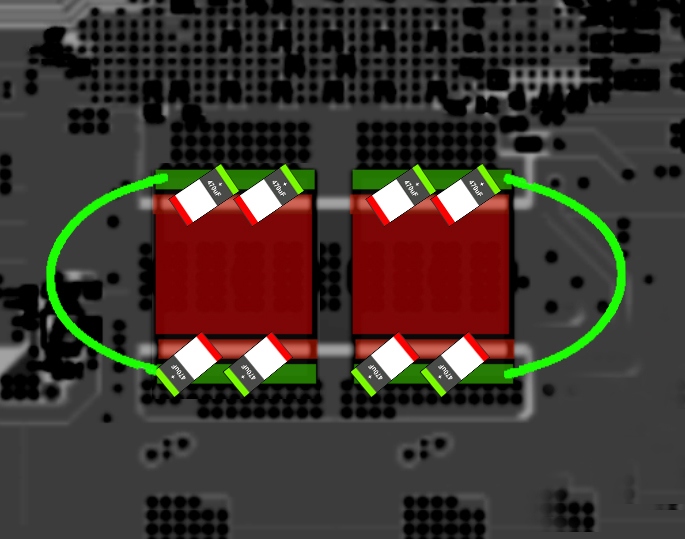 Q-1 – How long does this repair last?

A-1 – Once you make this capacitor repalacement, your PlayStation3 not only will improve reliability,but it will last you years to come, and you dont have to worry about YLOD anymore.

A-2 – Sony corrected this issue on the 45/40nm starting with the CECH-2100, so they dont encounter this issue, regarding the shutdown on these models,thats a different topic, it can be either a Mosfet/Resistor or even a PWM Chip, that issue its known as BlackOut.

Q-3 – Does these capacitors are the cause for the YLOD?

A-3 – Statistically speaking, 94% of the YLOD its due to these capacitors, as long as the unit hasnt been touched, chances are that its the NEC/TOKIN Capacitors, due to they high failure rate,but if this fix didnt help,then chances are then its another component failure.

A-4 – Yes, if you make a full capacitor replacement,meaning you replace all the capacitors, yes thoes titles will become playable, due to the original NEC/TOKIN Capacitors aging and capacitance loss, can´t supply the necessary to the CELL/RSX, thus the YLOD.

Q-5 – I dont want to remove the NEC/TOKINs,can i solder the Tantalum in parallel?

Q-6 – Have you tested this fixed yourself, or any other user has made this repair,and did you/they have success?

A-6 – Yes, ive made this repair myself, preformed on a European CECHC04 – 60GB, still works till this day, other users whom made the capacitors replacement have been successful on the repair, no failures reported so far, the rate its high.

Q-7 – Do you have plans to continue this repair on your personal consoles, or any consoles with YLOD you grab to prove this repair works?

A-7 – Yes, this repair motivates me to purchase more Phat models,since i collect PlayStation consoles,and i like my consoles in perfect working conditions, so reparing Phats shouldt be a problem.

Q-8 – Will this fix my Green Light Of Death (GLOD) PlayStation3?

A-8 – Unfortunately no, GLOD its not related to the NEC/TOKIN Capacitors in anyway shape or form, summarizing GLOD its caused by a dead Graphics Chip, mostly when the Substrate has failed “little tinny solder balls under the die” due to overheating/poor maintanence or even reballing/reflowing,since extreme heat does put a strain on the GPU die, your only choice is either a RSX replacement, or using a heat-gun at 150ºC, this will restore the GPU Substrate,and your PS3 should be in working order, but if you choose the heat-gun method,be warned this isnt a long last fix, GPU replacement its advised.

Credits goes to @sandungas for helping me out, and to many other users who tested it “cant remember the names,but thank you”