Nhảy đến nội dung
You may recall a recent article revealing a few exclusive screenshots of bguerville’s latest project, now the time has come to introduce the next evolution in PS3 Jailbreaking solutions. The PlayStation 3 Toolset by @bguerville is a new suite of tools, built upon a new PS3 exploitation framework & fueled by a new exploit discovered on the PS3 by the developer. The new exploit (and the toolset project as a whole) is compatible with all PS3 models running 4.82 – 4.86 OFW/HFW/CFW

While ps3xploit team member’s @habib continued research and development of PS3HEN for nonCFW models with assistance from @esc0rtd3w, @bguerville meanwhile was working on his own research and developing other tools and exploits as you will see with this new PlayStation 3 Toolset, which thorough testing was conducted by @esc0rtd3w (whom we recently interviewed). All the team of talented devs have done some amazing work in the scene in recent years with all the PS3Xploit projects and that trend continues with this release.

The PS3 toolset is a project that @bguerville has been working on for some time,
the developer gave us a brief timeline of events since the Ps3Xploit Tools 2.0 framework (flash writer and dumper(s)) that led to this new release (see the timeline section).

Some tools in this project may offer limited features on non-CFW compatible consoles. For instance, the Flash Memory Manager includes the most functionality for CFW-compatible consoles, certain of its features are available on non-CFW models, others aren’t. Features such as the dumping of flash memory (for backup purposes) and displaying of various console specific information in real-time such as the IDPS, Factory Installed Firmware version and automatic detection of your console’s Custom Firmware (cfw) compatibility status are available on both CFW compatibles & non CFW compatibles console’s.

Note that the PS3 Toolset does not feature PS3HEN, bguerville declared having his own plans for a HEN style solution.

The validation and safety checks have advanced greatly in this latest framework of bguerville’s tools (since the release of the flashing tools in PS3Xploit v1.0 and v2.0), the toolset detects your console type and only allows the features that are compatible with your console to be used on your system, making it noob proof while also being very user friendly thanks to new automation and detection built in.

Let us now discover this release and how to use various functions of the toolset. 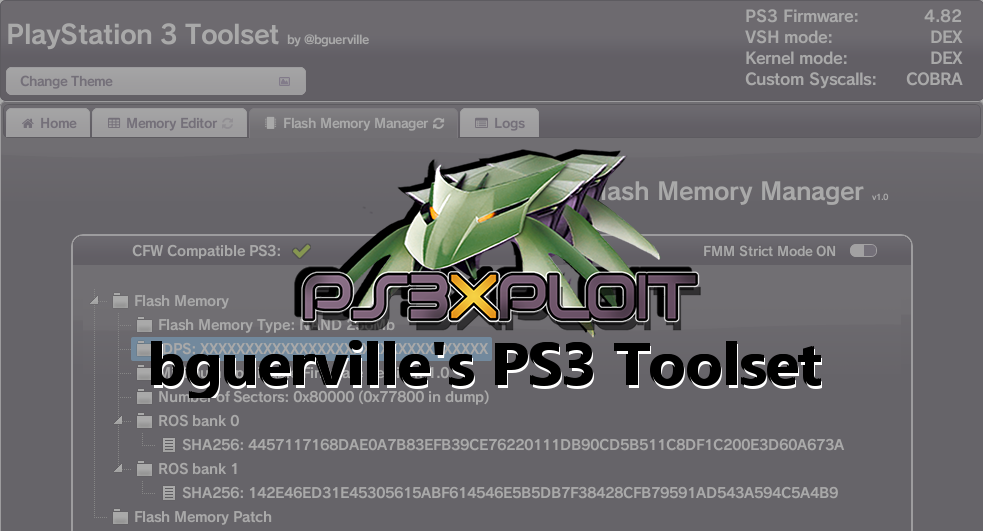