Nhảy đến nội dung
Our good friend and developer @kozarovv has recently shared with us two projects from developer Jabu . Recently we seen the first tool and that was PS2-FPKG and that is a tool that converts your PS2 games easily for use on the PS4 (jailbroken) system, now with that tool residing at version 0.3 the tool is becoming a popular choice fast. Some of the features and support include converting PS2 ISO/BIN files. The tool comes equipped with some customization like changing the Game Icon, Backgrounds, Multi-disc creation and also several other customization that include emulator choice custom Configs and more can be seen in the details of this tool in the first tab below:​
To follow that release up there is a tool called PSX-FPKG and this one is to convert PS1 games for use on a jailbroken PS4 (Currently only 6.72 is supported with the only 6.72 exploit is one that very buggy and not recommenced at this time as its very unstable and seems not to be tested well or properly debugged before release to the public – UPDATE: Now 5.05 is supported as well!) . This tool is only at v0.1 but has some great features out of the gate as outlined in the 2nd tab, see all details in the tabs below for each tool 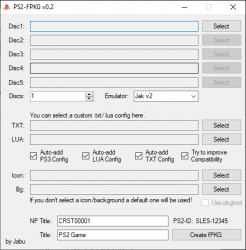 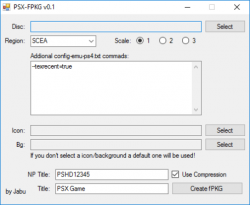